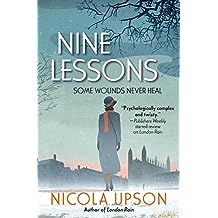 Called to the peaceful wooded churchyard of St-John’s-at-Hampstead, Detective Chief Inspector Archie Penrose faces one of the most audacious and unusual murders of his career. The body of the church’s organist is found in an opened grave, together with a photograph of a manor house and a cryptic note. The image leads Archie to Cambridge, where the crisp autumn air has brought with it bustling life to the ancient university and town.

Mystery author Josephine Tey and Archie’s lover Bridget Foley have each recently settled in Cambridge, though both women are not equally happy to see him. One has concealed an important secret from Archie which now threatens to come to light. Meanwhile, the change of seasons has also brought with it a series of vicious attacks against women in town, spreading fear and suspicion through the community.

Soon, another body is revealed, and in the shadow of King’s College Chapel, Archie uncovers a connection twenty-five years old which haunted both victims–as well as some of their living companions. As Archie and Josephine each grapple with savage malefactors intent on making their victims pay, they must race to stop another attack in this beautifully written, intricately plotted mystery.

There is nothing quite like finding a juicy mystery series that you can really get stuck into and Nine lessons is truly a brilliant crime mystery! It gripped me from the start with an unusual beginning and kept me intrigued with a very interesting storyline and with the gradual revealing of facts and information.  It was very satisfying to see the story dome together and the truth being revealed the way it was in the book.

In a lot of ways Nine Lessons is an old fashioned  style of crime mystery as it reminded me a lot of Ruth Rendall’s Inspector Wexford mysteries.   It is set in a time before computers the police have no technology to fall back on so they have to rely purely on the facts they are presented with and their own intelligence.  There are no fancy computer databases, DNA or even phones to help them solve the crime.  I thought this made the book really fascinating to read as you got to see how the police work and how they get to their conclusions.

Detective Chief Inspector Penrose was a fantastic main character.  He wasn’t the normally stereotypical police office that was either trying to prove himself of had something to hide.  Instead he seemed very able and confident in himself and his abilities.  I like the way he solved cases very methodically, looking for evidence and doing research rather than jumping to conclusions, even when he had a dislike for one of the main suspects.  He was very good at extracting information from people and didn’t seemed fazed when he hit a dead end, and instead just went back to the beginning and looked over that facts.  I also like Josephine who is a very strong, determined and fiercely feminist character.  She stood up for what she believed in, even though her opinions could upset or annoy another person.  She did sometimes go a little over the top in this regard gut overall i admired her drive and attitude, especially in a time when women were still trying to get equal rights.

The book does cover some very serious issues as part of the story does involve a rapist that is attacking single girls in Cambridge.  It was sad to see that, in some case, people’s attitude towards a rape having been committed is still largely the same with many people wondering if women are making it up or exaggerating it.  I have to admit that some of the descriptions regarding this were a little upsetting at times, particularly when the descriptions of the aftermath of the rape and how the women coped going on.

The books setting of Cambridge was brilliantly brought to life throughout the book.  I felt like i could really envision all the sights and natural beauty of the city in my mind.  The feeling of a big city is created throughout the book, through the rapist story line as it’s apparent throughout the investigation that no-one knows their neighbors and what they are really like.

Nine Lessons is 7th book in the Josephine Tey Mystery books but can easily be read as a stand alone which is what i have done.  I am now very excited to go back and read some more of the early books in the series as i really enjoyed this one.  As mentioned above i think this book would suit readers that enjoy classic crime novel’s like the Inspector Wexford mysteries or Agatha Christie.

Thank you to Sophia Portas and Faber & Faber publishers for my copy of this book.

Nicola Upson was born in Suffolk and read English at Downing College, Cambridge. She has worked in theatre and as a freelance journalist, and is the author of two non-fiction works and the recipient of an Escalator Award from the Arts Council England. Her debut novel, An Expert in Murder, was the first in a series of crime novels to feature Josephine Tey – one of the leading authors of Britain’s age of crime-writing. The book was dramatised by BBC Scotland for Woman’s Hour, and praised by PD James as marking ‘the arrival of a new and assured talent’.

Nicola lives with her partner in Cambridge and Cornwall, which was the setting for her second novel, Angel With Two Faces. The third book in the series, Two for Sorrow, was followed by Fear in the Sunlight and, most recently, The Death of Lucy Kyte. Taken together, they paint an atmospheric picture of England between the wars, contrasting the stark reality of life in the 1930s and 40s with the glamorous world of theatre and film and featuring a variety of real characters, from the Edwardian murderers, Amelia Sach and Annie Walters, to the Master of Suspense, Alfred Hitchcock. Her research for the books has included many conversations with people who lived through the period and who knew Josephine Tey well, most notably Sir John Gielgud.