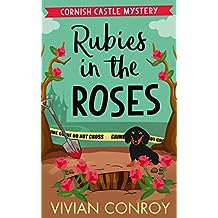 I’m very excited to be able to share an extract of Rubies in the Roses, the second book in the Cornish Castle Mystery series.  Thank you to Vivian for her understanding when due to some unexpected hospital visits I was unable to finish reading the book and she was kind enough to sort out an extract for me to post instead.

Welcome to Cornisea Island and spend your summer holidays in a Cornish Castle.

Guinevere Evans has a dream summer job: cataloging books at a castle on a tidal island off the coast of Cornwall. With her perky dachshund Dolly by her side she explores the island’s colourful history, tries fabulous local food and sees the gorgeous sunsets.

But when an old friend of her employer drops in, claiming a rare bejewelled wedding goblet is hidden in the castle gardens, strange events start to take place: several people turn up claiming they have a right to the elusive goblet, and a dead body is found on the beach.

An unfortunate accident, or does this death relate to the struggle for ownership of the goblet? Is there even a goblet?

Guinevere and Dolly dig in and discover plenty of motives to lie, steal and yes, maybe even kill. Can they prove what really happened to the victim and what became of the precious rubies that are at the heart of the mystery?

Grinning to herself, Guinevere walked to the door, still holding the book about treasures in her hand. She could hear Bolingbrooke’s careful footfalls across the creaking floorboards to the head of the stairs. There he seemed to wait, peeking down into the hallway to discern who was calling on him. Soon he’d come galloping back to her and hide in his library, throwing the door shut and claiming he wasn’t at home. There were many people Bolingbrooke didn’t care to see when they came to ask about the castle’s future, about unpaid bills or about donations for charitable projects.

But now she heard a delighted cry, ‘Gregory! Old man.’ And Bolingbrooke’s heavy footfalls beat down the stairs.

Dolly beside Guinevere made a surprised sound. Guinevere said to her, ‘Yes, girl, apparently it’s someone Lord B. does want to see. Let’s have a look for ourselves who it is then.’ She snapped her fingers to tell Dolly to walk by her side instead of rushing ahead, and then she tiptoed to the stairs to look down into the hallway below. If it was an old friend of Bolingbrooke’s, she didn’t want to disturb their reunion.

A short rotund man stood in the middle of the hallway. He had apparently dropped two suitcases to the floor as they stood on either side of him. Bolingbrooke smacked his large hand down on the visitor’s shoulder hard enough to send the short man tottering on his feet.

But despite this rough welcome the visitor’s face was all smiles. ‘Is this a surprise or what?’ ‘Indeed.’ Bolingbrooke grabbed him by the shoulders and shook him. ‘How long has it been? Twenty years? Man, I wasn’t even sure you were still alive. No, that’s not true, I knew you were, because you wrote up those amusing articles.’ ‘Amusing?’ his visitor repeated, his smiling features freezing. Even where Guinevere stood, she could sense indignation quivering through his posture. ‘Yes,’ Bolingbrooke continued unperturbed, laughing deep from his belly, ‘all those ideas about priceless artefacts that are hidden in old abbey ruins or remains of ancient keeps. You do know how to tell a tale.’ ‘They’re not tales,’ his visitor said in a cold voice. ‘Those artefacts really exist.’ Guinevere cringed at how Bolingbrooke was antagonizing his guest within minutes of reuniting with him.

But Bolingbrooke didn’t seem to sense the hostile atmosphere and continued seriously, ‘How many have you uncovered?’ He leaned over to his guest as if he wanted to exchange confidentialities with him. ‘How many? Not one, hmmm?’

His guest stood awkwardly, knotting his hands in front of him. Bolingbrooke said, ‘Look. I understand what you’re trying to do. People love stories about treasures and the mysterious circumstances under which they were buried or got lost. Some knight who won loot in an epic battle and then hid it where his enemies couldn’t find it and who devised a map with clues for his successors to recover it. Only nobody could make sense of his clues again. Until you came along of course.’

His visitor’s round jovial face was tight with tension now. He spoke slowly and meticulously as if he was teaching a class. ‘My line of research is a very serious undertaking. The total value of artefacts that have gone missing through time runs in the billions of pounds. If only a few could be recovered, we would be looking at items that any museum in the world would be desperate to own.’

If the above extract sounded interesting then do follow the blog tour and see what other reviewers thought of the book!

Vivian Conroy discovered Agatha Christie at 13 and quickly devoured all Poirot and Miss Marple stories. Over time Lord Peter Wimsey and Brother Cadfael joined her favorite sleuths. Even more fun than reading was thinking up her own fog-filled alleys, missing heirs and priceless artifacts. So Vivian created feisty Lady Alkmene and enigmatic reporter Jake Dubois sleuthing in 1920s London and the countryside, first appearing in A PROPOSAL TO DIE FOR (published by Carina UK/Harper Collins).

For the latest #LadyAlkmene, with a dash of dogs and chocolate, follow Vivian on Twitter via @VivWrites.

One thought on “#Blogtour #Extract: Rubies In the Roses by Vivian Conroy @VivWrites @HQDigitalUK”